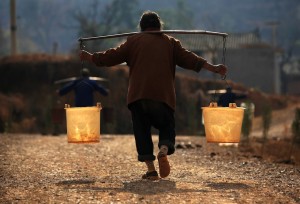 Chinese villagers carry pails of water they collected from a well, back to their homes in Yiliang, southwest China’s Yunnan province on February 27, 2012. A drought in Yunnan province has left 3.19 million people and 1.58 million livestock short of drinking water, the provincial government said, as drought and low rainfall in the three consecutive years have dried up 273 rivers and 413 small reservoirs in the province. CHINA OUT AFP PHOTO (Photo credit should read STR/AFP/Getty Images)

Per la tua vacanza a Napoli

Per contattarmi scrivi a